10PM. I think we’re 4 hours ahead of Eastern Time now.

Well, we’ve had an eventful day. Early this morning, just after I hit the “send” button for the last update, about 5AM, I heard a CRACK! At first, I thought it was one of those wave-slapping-bottom-of-wing-deck canons, but the conditions weren’t quite right for that. In any case, I jumped up to investigate.

I looked out the front door, and saw that the code zero sail, which had been doing a fantastic job of speeding us along – mostly 8 -10 knots in about 16 knots of wind – was gone. I could see that the tack – the forward-most corner – was still attached to the bowsprit, but the rest of the sail was over the port side, outside the lifelines. We were obviously dragging it through the water as the boat continued to sail. The halyard, the line that holds up the sail from the top of the mast, had broken, it turns out, about four feet from the end of the line that attaches to the top of the sail.

I gave the side of one of the pilothouse cabinets three hard slaps – our signal to each other that one person needs the other – and yelled out something like, “The code zero sail is in the water!” Philip had been trying to catch up on his “long sleep,” unfortunately, but it was obvious that wasn’t going to happen this morning.

He quickly went into captain mode. The first thing he did was try to get the front of the sail under control. As he brought some of it on deck and tied it off, he had me steer the boat to slow it down, putting the wind as far astern as I could without gybing the mainsail, which was still keeping the boat moving. I got it down from 7 knots to 1 knot or so, then put the autopilot back in charge.

Long story short, we were finally able to bring the entire sail up so it was inside the lifelines. The trick, as Philip said to me several times, was to not tear it – and not to fall overboard while trying to get the sail up.

The tough part at the end was the hoop and its sail sock – which were acting like a sea anchor. That’s something you put in the water when you’re in really heavy weather and you want to slow the boat down – the real sea anchor we have is more like a parachute, but there are bucket-like sea anchors. That’s how the hoop and sock were behaving. There was a lot of pressure on the hoop and sock, and we didn’t want to damage it as we brought it up. So we worked with the surges as the waves came under the boat, and got it on board.

We were glad to see that the sail hadn’t gone under the boat and gotten caught on the props or the rudder. It’s a little dirtier, having rubbed against the bottom of the boat, but otherwise OK.

We spent the next two hours or so, as the sun was rising and there were full rainbows in front of us, getting the whole thing untangled and straightened. We set it up a new way that Philip had worked out earlier, flaking it down on the port trampoline, then tying it down.

It is ready to hoist again. Fortunately we have another halyard specifically for that sail. Lucky. Here’s the halyard that chafed through at the top of the mast, causing the sail to drop: 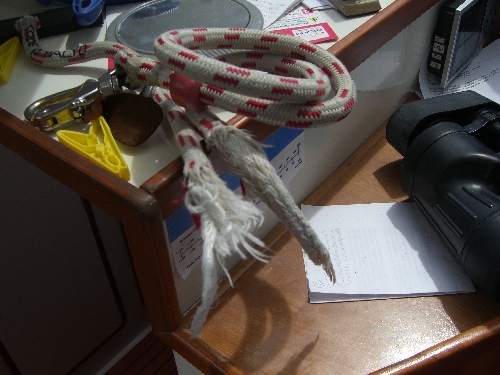 Later in the morning we had our first real rain squall, coming down in buckets. 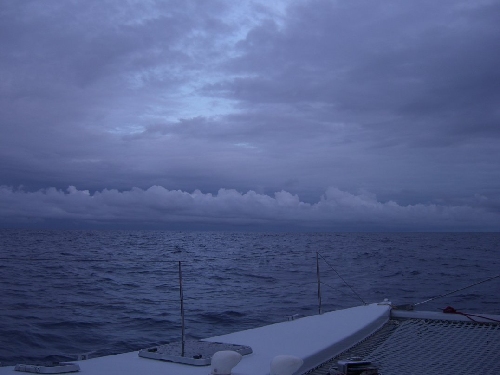 We filled some buckets, using the aft bimini, but I had to take it down after a while because the rain was coming down faster than it could drain out of the hole in the center – and the bimini was turning into a massively stretched water balloon.

Things are getting pretty salty. There’s a salt film on just about everything, so you end up using towels and tea towels on the cushions and chairs.

Otherwise, the wind is continuing to hold, and we are making our way northwest or southwest, depending on the wind direction.