Two visitors tonight, very determined to hitch a ride. They are out here in the middle of the ocean, but they look more like crows than any kind of sea bird – I’m pretty sure they don’t have webbed feet. The same kind of bird lighted on the boat as we left St. Helena, and we both noted that the bird was remarkably tame and very hesitant to leave. Tonight there are two, and they are trying really, really hard to hitch a ride.

Now, lest anyone think differently, I should tell you I love birds. It’s their “gifts” that I object to, especially when they decide that the top of the aft bimini is a really cool place to hang out. The aft bimini is what we use to catch rainwater. So you can see the problem.

So yours truly has spent part of this evening on bird patrol, standing on the afterdeck with boat hook in hand, ready to literally tap the birds on their tailfeathers when they try to land. Doesn’t phase them one bit, however; they’re back a minute later.

I’ll have to look in the sea birds book we brought to see if we can identify the type of bird. They’re smaller than a crow, brown with a yellow marking near their beak. I got one good picture of one of them, trying to light on the radar dome: 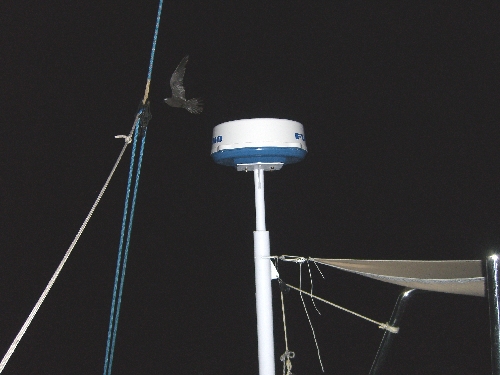 They seem to have given up for now…

This morning we rolled up the jib and hoisted the Code Zero sail. The difference in speed was noticeable. If you have the boat pointed in the optimum direction, you get more boat speed for every knot of wind speed when the Code Zero is up. Sometimes the digital readouts show the boat going faster than the wind, if only briefly.

We continue to head northwest, and are anticipating hitting the doldrums within about 6 days. Matthew is looking at the wind information on his computer, and is trying to find a “pathway” through the doldrums that has enough wind for us to get through. I will say it’s lots more fun sailing when there is wind, especially when you’re in the middle of a bumpy ocean. “Slatting around,” with everything banging and rattling, is a bit nerve-racking. However, so far, the wind has been very good to us, enabling us to head pretty much in the direction we want to go in, mostly traveling along at 7 to 8 knots.

I can understand why Philip made sure our “next” boat had an autopilot. He had experienced them while on long sea deliveries, and knew it was the way to go. I mean, here I am typing, and except for minor tweaks to the autopilot settings, the boat is steering herself, zipping along. Instead of being chained to a steering wheel, you can do all those other things, while still getting to your destination.

One thing I’m really starting to enjoy…when we have the sea swells behind us, they raise the entire boat up, she surfs for a few seconds, perched on top of the sea swell, bows hanging over the front of the swell. You can see more of the ocean around you when you’re up high. Then, because the swell is traveling faster than we are (not always the case), the swell continues along in front of us and she drops back to catch the next one.

That moment – when we are at the top of the swell – is like that moment on a roller coaster ride, when you’ve gone to the “top” and you can’t see any track in front of you – and you brace yourself, because you know what’s coming next. One of my favorite places to stand on deck is right next to the daggerboards, which are pulled up because we are going downwind. They almost as tall as I am and quite sturdy, so you can brace yourself on a daggerboard and watch the bows do that roller coaster thing. Quite entertaining.

Philip asked me this morning how I was adapting to life at sea. It was a strange thought, because I don’t feel I’m adapting. Perhaps it was because we’ve been thinking about this boat so long, and working on every detail – even as she was being built – and then living aboard while we got her ready for sea, that I just feel like this is another phase of a long journey. And the sea, once you’ve been on it a few days, starts to reveal its patterns and visual clues, and its beauty – wind, swell, waves, horizon, sun and rain and stars and moonlight.

This is a long ocean journey. After this, if we decide to go to Europe or something, as Philip said during dinner, it will seem like nothing. 2 weeks of food? Easy, compared to 8 weeks. The garden is looking really healthy now, the aphid battle seems to be won (thanks, Janet! and Chris, too – I think spritzing with garlic water really did the trick). I’m starting to grow sprouts; my next culinary challenge will be making them palatable to the vegetable-adverse captain.

Well, back to book writing, starting the generator for its daily run, and watching the sun come up. This morning there was a very big puffy cloud bank just forward of the boat, turned an intense ivory color by the rising sun. Then a rainbow appeared, right in the middle of it. Spectacular.