Never did see Ascension Island, too far over the horizon and all we really wanted to do was make sure we didn’t hit it.

We had a nice rain shower while I was sleeping (OK, so I woke up when it rained). The boat is getting cleaner and cleaner, as everyone predicted. The rain showers never seem to last long, so if you want to stand outside and get clean, you need to move fast. Matthew told us that one captain, seeing the rain coming, would lather up before the rain showed up, and then stand out there and get rinsed. The first time it happened, everyone laughed at him. They went out and lathered up while it was raining, and then the rain stopped before they could get rinsed off. They didn’t laugh at him after that.

Here’s a shot of the kinds of sunrises we see…absolutely gorgeous. 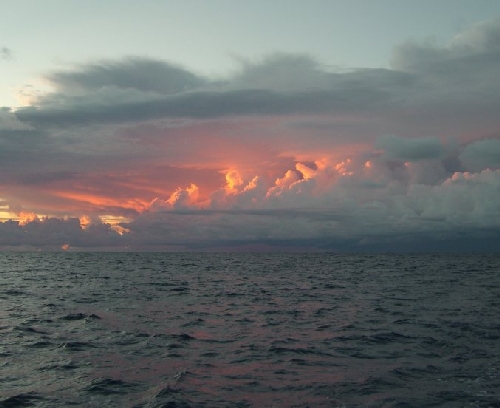 Right now the wind is blowing about 11 knots on average, and the boat is sailing happily at 6 – 7 knots. The wind “backed” – went counterclockwise (or “anti-clockwise,” as they say in some countries), so now the autopilot is set for our exact course – 310 degrees. That gets us to the Penedos Islands.

What we don’t know yet is where the doldrums are. We’ll get that data from Matthew soon. The band of no wind at or near the equator tends to be wider (north to south) on the Africa side and narrower on the South America side – so a lot of people sail due west first and then north. The wind we have had so far has kept us going in a mostly northerly direction, with some west thrown in.

We had what I consider to be a little miracle happen…. Last night, I made a mistake. First, the picture: The mainsail has a boom on the bottom, which has a line coming out of the end of it called a mainsheet. That line goes through some pulleys (blocks) and is then attached to a sliding car, which is attached to a traveler. The traveler is a long metal rail all along the aft edge of the pilot house. You control the angle of the sail to the wind by moving the car along the traveler.

OK, back to my mistake. Gybing means that as you are going downwind, you turn the boat so that the wind is on the other side of the sails. When you do that, there’s a lot of force pushing on the mainsail – on one side or the other.

First you bring the main up to the middle of the pilothouse, then you start to make your turn. As you make the turn and pull the mainsheet and its car to the other side of the traveler, you must keep that car under control, or the mainsail will slide violently to the other side of the traveler, friction-free, as soon as the wind catches it. So, as you pull the car over to the new position with one traveler line, you hold the other traveler line – with it wrapped once or twice around the winch – and feed it out carefully so everything stays in control while the wind fills the mainsail from the other direction.

I didn’t do that “keep the car under control” part. The mainsheet and its car were in the middle of the pilothouse, and they slid way too fast to the port side when the wind filled the sail from the new direction. There’s a stopper at the end of the traveler, so that’s what kept the car from going off the traveler, but it really shouldn’t have to do that kind of work. Well, that won’t happen again. I will remember next time to be holding that other line and keeping it under control.

Here’s where the little miracle comes in. The next day, in the afternoon, I noticed a little piece of rubber, a little black cylinder, about an inch tall and about 3/8 of an inch around, sitting comfortably against one of the blocks on deck. I went on deck and brought it in. I wondered where it came from. Later in the day, I was looking at the mainsheet car, and noticed there were 3 of those little rubber cylinders in the car itself, acting as “bumpers” for the shackle that holds the main to the car. One of the “bumpers” was missing – there was a space for a fourth one.

Apparently the force of the unrestricted car caused that little rubber bumper to go flying – and instead of just going overboard right away or later – after all, this boat is in constant motion over the waves – it found a perfect place for itself on deck, and just stayed there until I found it. Thanks, God!. 🙂

The new schedule is great for us. It feels so good to be able to get about 7 hours of sleep, and it’s not hurting me to have only breakfast and supper. I hope this weight loss is not just my imagination – we’ll find out when I actually step on a scale on dry land. Philip still gets a sandwich, but at midnight or so.

It’s getting warmer; I put a package of ham steaks out in the sun to defrost, and they were completely defrosted in about 20 minutes. It was 85 yesterday.

We’re still here, still enjoying the solitude and beauty all around us, and getting more and more familiar with the boat and what she needs from us. And, we’re still making progress in the right direction.

Happy Monday to you all…