Going 9 knots in 18 knots of wind. Finally stable after a wild night.

But I should start with last night. I really couldn’t get to sleep, and Philip really needed sleep, so at 9PM, I got up and he went down.

It was a very long night. The wind decided, during the night, to just do ANYTHING. One minute it was from one side of the compass. The other minute it was from the other side. Absolutely random, crazy direction changes. Now, if you’re just walking along or driving your car, or even driving a power boat, no big deal. Wind changing direction? That’s nice. But if you’ve got two sails up, and a big swell, and it takes a bit of time to gybe, well, wind direction matters.

First I tried to deal with it by pushing the buttons on the autopilot digital display. Autopilot steers too far? Boat goes too fast. Autopilot doesn’t respond fast enough? Jib gets backed. I sat at the navigation desk for a couple of hours, fighting sleepiness, pushing those buttons.

Finally I gave up and went out in to the cockpit and steered the boat myself. It wasn’t much easier, because the wind was still really screwy, but at least I didn’t have any trouble staying awake. I gybed a couple of times during the night, and that was wild, too. No sooner had I gotten everything settled on one tack – or even right in the middle of that tack – than the wind would go 60 degrees in another direction. By the time Philip relieved me I was pooped, and slept for hours.

Today the sun was shining brightly and the day started out with light wind. 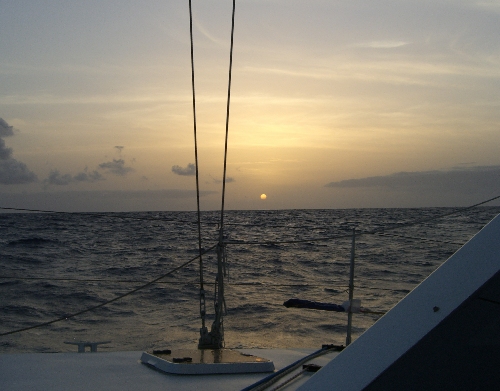 Perfect for washing, so I did that and hung everything out to dry. Ha. As of now, they’ve been “rinsed” several times in some squalls. 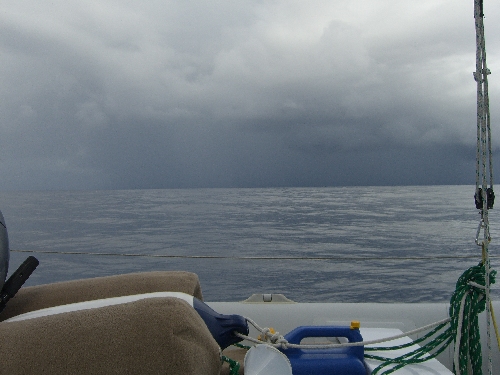 Here’s a squall coming toward us from behind. The wind is dead calm near us, but just under the cloud – where you can see the dark rain coming down – the water is dark. That’s where the wind is – it can go from 2 knots of wind to 25 knots in a matter of seconds.

Sheets of rain, and wind hitting 25. Philip “steered” the first one from inside using the buttons. I finally got some sleep, and when I woke up, he was on bird patrol. They were back. He went to bed.

When the second squall hit, I wanted to see if I could spare the autopilot and also understand how Horizon steers in these conditions. Whoosh! Just to keep her going in a somewhat straight line, I had to use an almost full turn on the wheel, as the apparent wind went from 83 degrees on the compass to 156 on the compass in a matter of seconds. (The “true” wind is just the plain old wind. The “apparent” wind is the combination of the true wind and the breeze the boat is making as she goes through the water.) At one point, I knew I needed help, and stomped three times on the cockpit floor. Philip came up and reefed the jib, which helped a lot.

The birds left before the squall hit. I guess they knew it was coming.

I have to laugh when I think about a business associate who sent me an email saying something about picturing me sipping a cocktail on the deck of our boat. Yes, there are moments when you can look at the sea and think deep thoughts. But mostly it’s just hard work in a nice environment.

Well, now it’s something like 3 hours later and in that time the wind increased to 30 knots, the jib and main got backed because the wind was so variable the autopilot couldn’t keep up with it, Philip had to put a double reef in the main while I tried to steer a steady course in the waves, and now the generator, which I usually run in the morning to supplement the amps we get from the solar panel, is having problems. We’re not sure what it is yet, but it could mean no freezer and/or refrigerator for the balance of the trip. We’ll see. He’s investigating.

I’m going to sign off now, I’ll let you know how it turned out.

OK, I’m back. The squalls are still pushing the boat to the limit, blowing 20 to 30 knots. One after the other, a series of them, and we seem to be in sync – they move faster than we do, but we appear to be going in the same direction. We managed to go one way while the squall went the other, but not we’re just riding them out – it’s a lot of wind, and the boat is manageable when everything is reefed. I’ve got the autopilot on right now but will want to go out and steer again, so this will be short. Turns out those canons only come when the apparent wind is 110 degrees – and I keep us away from that, but the autopilot doesn’t.

Anyway, the problem with the generator was the impeller – a small piece with blades on it that goes around inside a metal housing – had disintegrated. Shouldn’t have, this soon in the life of the unit. Fortunately, 1) he knew what to do and 2) we had a spares kit with an impeller in it. He went into the engine room and fixed it. So we still have use of the fridge and freezer after all. Thank you, Philip.

Tired. Lots of steering. Will get a nap shortly.