Well, several people asked that I check in every day even if there’s nothing new to report. So here I am.

The wind strength increased yesterday, to a nice 18 – 22 knots, and continues through today. This is probably going to be what we see until we are affected by a low pressure system or we reach the doldrums.

Last night, on Philip’s awake time, the autopilot took a wrong turn – we think it was to adjust for a wave, which is a constant occurrence (you would not believe the swells out here – just normal for anyone who’s been to sea, but it’s really quite impressive).

In any case, we had to get the wind back on the correct side of the boat without doing anything too suddenly (causing the boat to “spin out”) or breaking something. I took the wheel and held the course – and read off the numbers on the digital display as needed (boat speed, wind speed, wind direction) and the compass heading, while Philip untangled the mess. He did a good job, and finally we were able to safely turn the boat back to its proper heading, and refill the sails from the correct side. Then we put another reef in the main, so now we are at the “second reef” out of a possible three.

We’ve been going along in this way, at 7 – 8 knots, in about 21 knots of wind, since last night, surfing the swell as well as rising and sinking as the swells go beneath us. The wave slamming underneath the wing deck is back (it sounds like the thunder sound effect in the movies), but I’m getting used to it, and we did have a discussion last night about how these boats are actually “overbuilt.” Philip remembered emails from Tom Burgess, who owns the second Atlantic 48, on his first journey to the Caribbean – he was jumping off waves at 25 knots. So I guess our current situation would be considered quite conservative in comparison.

This way of getting there is much nicer than no wind, however, so no one here is complaining! Here’s a shot of the cockpit from inside the pilothouse, with the boat steering herself with the autopilot. We love the forward cockpit on the Atlantic 48 catamarans. 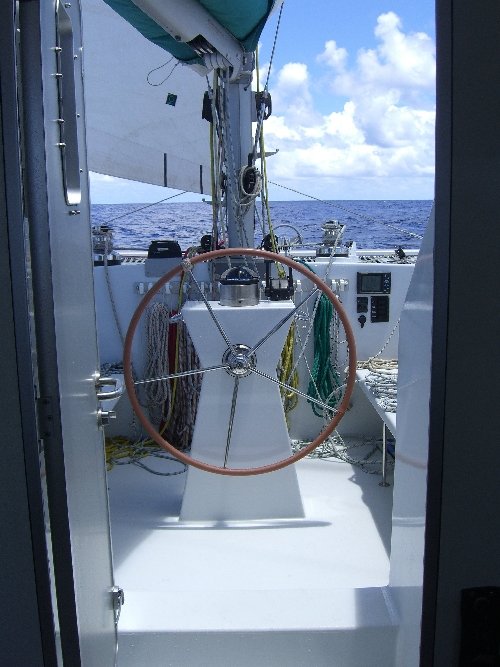 I’m still battling an iffy gut, but put on a new patch last night which should help. Philip has a small rash on his chin; hopefully we can email the skin doctor and see if we can get some advice. It’s in a place where the radiation from cancer treatments removed most of his beard, and he wasn’t putting sunscreen there, so it might just be a burn of some sort.

Otherwise we are fine, zooming along again.