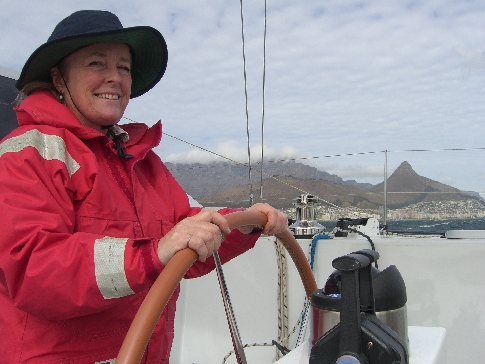 Kristin Zhivago – “Admiral” (according to the Captain) – that’s still Table Mountain in the background, but also the “Lion’s Head” – the pointy hill – and the “Lion’s Rump,” the smooth hill to the left of the “head.”

We left Monday at noon, Cape Town time. Winds were strong; 35 to 40, for a couple of days after we left Cape Town. Seas were very bumpy. It’s better now, three days later. The winds are more in the 18 – 20 range.

When a wave comes from the side of the boat, sometimes it makes a big crashing sound – but I’m told that’s common for catamarans. Sounds and feels like a canon underneath the wing deck (the deck between the two hulls, which holds the cockpit, the pilothouse, and the afterdeck).

We’re sorting out our sleep and watch patterns. I’m still seasick, but haven’t lost any meals yet. Only one snafu so far; the freezer temp started to rise and it wasn’t running. Philip traced it to wires near the fridge compressor which needed some attention. Now it’s all fixed and the freezer is happy again.

Only a few large ships, and sea birds. And waves as far as the eye can see.

We are going to try to stop in St Helena. It takes about 10 days to get there. The boat is so fast it is amazing. 8 knots on average, could easily be doing more, but this is fast enough, given the waves and wind we are seeing (I am finishing this Thursday morning; it’s blowing 30 right now). Sorry I didn’t send an update sooner, we’ve been settling in.

Here’s a shot of the stern wave off the port stern. She’s going about 8 knots in this picture. Remember…this is sail power only!

Much love, will write again soon.