Our search for wind to the west was a bust, so we gybed the main and the code zero sail this morning at the end of my watch, when Philip got up, and headed north again. Most of the day, we were doing an average of 5 knots, which isn’t fast – it means you will probably only do 75 – 100 miles a day, instead of 180 or so – but you are still getting there. Once we gybed, the swell was behind us instead of crossways to us, and the little troll at the barn door with the rusty hinges got a little less maniacal. There’s still the same noise, as the boat interacts with the swells and the preventer straps stretch against the boom, but it fades into the background. The wah-has are farther apart and less frantic.

We are truly ghosting along, on this moonlit night. The moon is shining on our stern now. The sky has some clouds, but fewer than normal. We still have enough wind for steerage. I’m praying for wind. As I get older, I’m finding that praying is positive in all circumstances. At the very least, it puts me in a God frame of mind, which is a good thing.

It looks like we are going to Bermuda after all, just to get some fuel. Our diesel tanks, which are big rubber bladders under the workshop and galley floorboards, are about half full. It looks like the winds are going to continue to be light going forward. The front that we thought would slingshot us home with high winds – in the 20s and 30s – has moved on, leaving a high pressure system in its wake, with very light winds. Matthew is recommending we motor home, so we’re making sure we have enough fuel if we need to do that.

Philip says the customs office in Bermuda, which he has visited several times on boat deliveries with Mickey, is right down the hill from the grocery store. The store is more like a convenience store – probably not much green stuff, but worth a look – so I’ll run up there and see what I can find while he’s going through the formalities with the customs folks. We may change this plan, but right now we are thinking it will be a quick stop for fuel and veggies, then on our way again. Knowing us, we will do whatever we can to sail home, rather than resorting to engines When given the option, we always sail. Even with our monohull, we sailed on to and off of our mooring (the buoy just off our beach) during the whole season.

The Captain was masterful at getting up to the mooring under sail, regardless of the conditions. It’s always different, and one of the more challenging aspects of sailing. He attached a fairly long (about 20 feet) “pickup line,” which was a yellow line that floated, and had a small yellow float at the end of it (about half the size of a football). The current had the most effect on the pickup line and its little float. If the current was ebbing – going out to sea – the float and its line would be streaming south of the mooring ball. If the current was flooding – coming into the bay – the float and its line would be streaming north of the mooring ball. That’s the current part.

But then there is the wind strength and direction, which he had to use to approach the float just right. When there was plenty of wind, let’s say from the south, he would sail east toward the mooring ball, perpendicular to the north/south streaming line, and, at the last minute, turn toward the streaming line. The boat’s momentum after he made the turn – even though the sails were no longer drawing – would be enough to get close enough to snag the line. When he did it perfectly, after I had snagged and secured the line, the boat stopped right at the mooring ball, without going past it.

As we approached the mooring buoy, I would always be on the bow, ready with a boat hook. As soon as the bow of the boat was close enough to the float, I would snag it with the boat hook. pull it on board quickly (using a specific hand-over-hand routine that he taught me, which I had to practice a lot), and then quickly cleat the line off on the bow cleat. The boat was then secure. I would then stand up right away and we’d start lowering the jib, which was right there at the bow. Philip would be back in the cockpit, easing the jib halyard so the sail came down, and I’d be flaking (folding) the luff (the front edge) of it to one side and then the other so it was folded properly. As soon as that was done, Philip would jump on top of the cabin and lower and flake the mainsail. When we got it right, it was poetry in motion, and very satisfying.

There were times when the current was ebbing – going south – so the line was streaming south, but the wind was also coming from the south. So we had to approach the line from the south, but couldn’t sail up to it with the sails up, under full power. If we did, we’d be approaching it too quickly. You had to approach slowly enough so you could pick up the line and secure it before you sailed past the larger mooring ball. So, we’d get within shouting distance of the mooring ball, then drop all the sails, then approach the mooring ball “under bare poles.” The wind had to be strong enough so that even though we had no sails up, it was enough to push the boat against the current, which was going in the opposite direction, and get you to the pickup line with just the right amount of speed.

Because we always sailed when we could, we hardly ever used the engine. When we sold the boat the engine had something like 100 hours on it, if memory serves me, and we owned the boat for 22 years. At the end of the summer we always had to have a diver come and clean the prop, which was no longer a prop, but more like a big green slime ball due to marine growth because we hadn’t used it all summer. We would use the engine to come into our dock at a marina across the bay, where we kept the boat for the winter. We did some docking under sail, however, if the conditions were right.

Anyway, back to Horizon. We’ll see what develops, but if there is any way to sail home, that’s what we will do.

We did our first true “horizon job” today. That’s what happens when one boat goes so much faster than another boat that the faster boat disappears over the horizon. It’s one of the reasons this boat, because she is so fast, is called Horizon. There was another sailboat to the east of us, abeam of us (meaning 90 degrees to the fore-and-aft line of the boat). I thought it was about 45 feet long, but Philip said it was 60. For a little while, it looked like she was going a bit faster than us. There is an old adage, something like if there are two boats on the water, it’s a race. I was cooking, but couldn’t resist testing our relative speed, so turned the autopilot upwind just slightly, taking us from 4 knots to 6. By the time we were sitting down to eat, the monohull was literally disappearing over the horizon, astern of us.

I show the time on this message as 1:15 AM, but we got a bit behind in our time zones and we’re slowly adjusting the clocks to catch up. According to our GPS and satellite phone, we’re in the Eastern Time Zone right now. Our on-board clocks are two hours behind. When you cross as many time zones as we have in the last 7 weeks, and there’s no cell phone to tell you what time it is, and you’re busy focusing on other things, I guess it’s easy for this to happen. We were setting the clocks back a half hour a day for a few days to catch up. We stopped for a day or two just to have a couple of normal 24-hour-days. Captain’s decision, thought it was a good one. We have a week or so to get in sync. Golly. Almost home. It will be strange not sailing all the time.

We had a visitor today, a “laughing gull,” with a distinctive black head. He flew circles around the boat a number of times, making his little laughing call, then disappeared. Philip told him he wouldn’t be getting any food from us, in case he was expecting some. We don’t feed wild birds. The city seagulls in San Francisco, who got lots of free handouts, were obnoxious. Our house in Jamestown has a stream, just to the south of the stone wall around our property, that empties into the bay. When we first moved there, we saw all the seagulls there – drinking the fresh water, washing themselves in it, and just hanging out – and thought, oh-oh, obnoxious seagulls. But no one feeds them, and they’re not obnoxious at all. They eat crabs and clams, and are very polite neighbors. 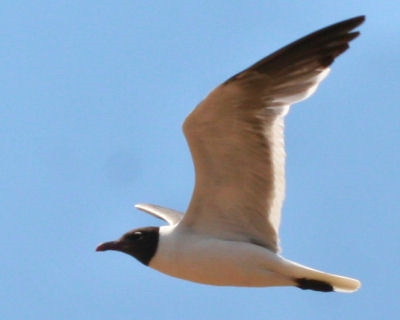 The book awaits, gotta run. Nice visiting with you. Just headed the boat up slightly (turned it toward the wind), and we’re moving right along, 5 knots. Ahhhh.