Current time: 7AM (we realized we’d crossed a time zone, and reset our clocks) 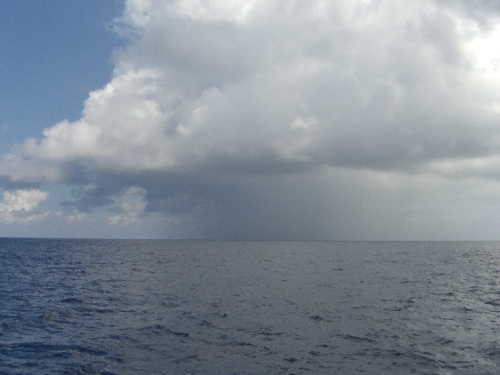 Squall up ahead, identifiable by the dark area under the cloud. At night, sometimes you can see these ahead of you, sometimes you can’t. Depends on the conditions. Sometimes what you think is a squall is just a moonshadow underneath a cloud. The trick is to keep watching, and to be ready to make adjustments at a moment’s notice. 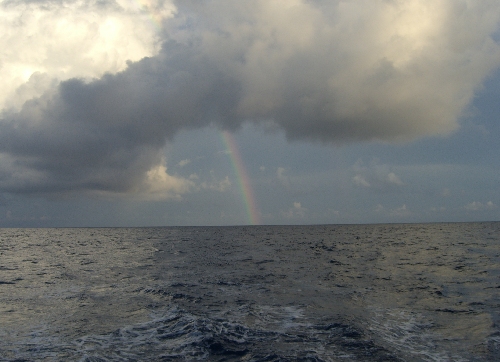 I saw more rainbows on this journey than I did in 20 years on land in the States. There were three that were really distinctive. A full one that literally straddled the equator, with a white sky behind it. One, on that same day, that looked like someone had sat on it; a full rainbow appeared under a low-lying cloud and barely formed an arch. One that appeared inside a yellow thunderhead as the sun was rising. In all three cases, I was too busy observing to go inside and get my camera, but they will be forever etched on my heart.

I got a good dose of that very concept this evening. What a night. Both Philip and I spent quite a bit of time on our watches steering due to squalls. I took over at 1AM, got his report while talking to him in the cockpit, put my hands on the wheel, and didn’t move from that spot until 6:30 this morning. I couldn’t turn it over to the autopilot until then.

The winds were really, really unpredictable all night. I was busy every second, keeping the wind and the sails in harmony. There were times when the digital readout said 179 degrees for the apparent wind angle, showing an arrowhead to the right of the number to show that the wind was coming from the starboard side of the boat. Then, one second later, the same number was there, but the arrow had switched sides!

Fortunately I was going upwind, so getting on the other tack wasn’t as big of a deal as it is when you gybe – the mainsail is set at the centerline of the boat, and there is no need to do anything with it. When you tack gybe, as you make the turn, the wind is behind you. Both the mainsail and the jib need to switch sides. When you tack, as you make the turn, the wind is in front of you. The main stays where it was – on the centerline of the boat – and you only have to tack the jib, by letting loose one sheet (the line attached to the aft bottom corner of the sail – the “clew”) and pull in the sheet on the other side. I must have done that 30 times last night, the wind was so variable. For about an hour, when it was fairly light, I just held both sheets and pulled them in as the wind shifted.

In these squalls, the wind increases, usually to about 17 tops, and it POURS. Then, you leave the squall, and the wind dies. Completely. As in Zero.

Usually I try to find a heading that is “as close as possible” to the desired compass heading, and see if I can rustle up any wind. But the problem with that is you often end up going in a direction that is not the direction you want to go in – as in, away from home, not towards it. That’s one of the reasons today’s position doesn’t show much progress. So this time, I kept the desired compass heading, and just did whatever I could to keep the sails quiet, if not drawing some wind. We also haven’t made much progress in the last 24 hours because it has been light. No wind or very little. This may be our doldrums section, not sure yet.

I usually can rely on the autopilot while on watch, but not this time. So this will have to be a short update – I have to get caught up on some work.

We are definitely in the doldrums, according to Matthew’s analysis. But he also says wind will show up tomorrow at noon, and will probably hold after that. In the meantime, we ghost along at 1 knot in more rain.

Love to you all,
Philip and Kristin