We are currently speeding away from St Helena, which was, as everyone said, “Not to be missed.” What a pleasant place. We anchored – first time we’ve anchored the boat – in the small harbor, after arriving there in the late afternoon. We had to resort to engines the last few miles; the wind just died completely, and if we had ghosted our way along, we would have come to the harbor in darkness. We didn’t want to do that. So we motored in.

Shortly after we arrived and settled, a man came by in a little wooden workboat, and said that “the doctor would be out to see us at 4PM.” That’s when we realized that we had passed through another time zone and we needed to reset our clocks and watches – since we thought 4PM had already passed. Sure enough, around 4PM the doctor showed up. He managed to get on board in the surging sea, and took our temperatures with an infrared device – because of the concern about swine flu. Since we had been at sea for 2 weeks, and I’ve had very little luck rousing websites, we were not as aware of the new pandemic as the good doctor. We were cleared, and he gave us some tips about getting about on the island, which we decided we would do the next day (today).

Spending the night at anchor was wonderful. Very peaceful. I’m looking forward to doing more of that after we get the boat home. Philip slept the whole night through, and needed the rest. I was on partial anchor watch, to make sure we didn’t drag. It was very deep there, so we had to put out all the chain and most of the line. One of my landmarks when checking our position at anchor was the “700 steps” [aka “Jacob’s Ladder”] to Napoleon’s Castle. It’s lit with a chain of lights running up the side of the steep cliff, and makes a very distinctive landmark for anyone coming to the harbor at night.

The next morning the captain was in an ambitious mood, having had a good night of sleep, so we attended to several items first thing. One was to lower the dinghy over the stern so he could go underneath the after part of the wing deck and lubricate the rollers where the steering cables pass through. I was up in the pilothouse, moving the wheel back and forth, so he could hear it make the squeaking noise. As soon as some of the lubrication got into the axle – the metal pin in the center of the rollers – the noise stopped. Good. It was nice to know we wouldn’t have to listen to that for the remainder of the trip.

As soon as we had breakfast, we went into town. The man in the workboat (the “ferry”) came out to get us, and let us off at the “steps” – a concrete area with ropes hanging down that you grab as you get out of the boat. You have to time it just right, as the boat surges up and down at least 6 feet with each wave. You leap, and then you’re on land. Not dry land, but land.

We found ourselves in the “container port” for St Helena which consists of about 10 containers and two cranes. It’s a narrow little area at the base of the left-hand cliff. Even the container port is quaint. 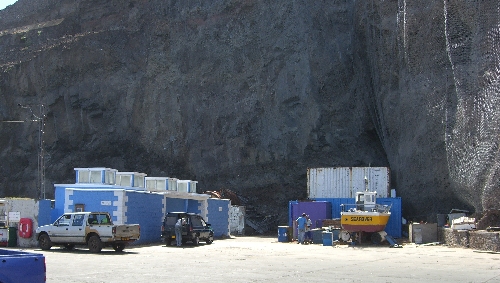 There’s the sea wall, a small street along the wall, buildings built right into the cliff, and the cliffs, which rise straight up for hundreds of feet. The entire cliff above the “container port” is draped with a covering made of chain link fence, to keep the rocks from falling down on the people working there. The buildings were made of stone – including their arched roofs – for obvious reasons. 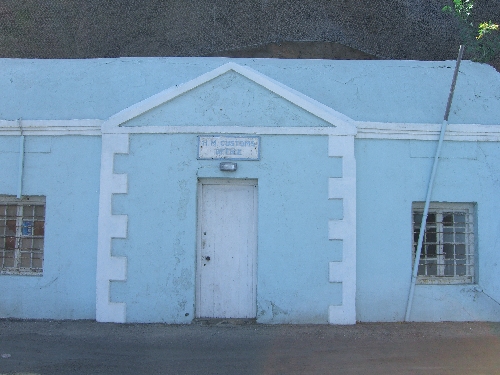 In this shot you can see the chain link fence behind one of the buildings, and the concrete roof.

The town is a one-street town nestled between the steep cliffs on either side. There’s a lovely gate leading up into town, then a church and shops and gardens on either side of the one road, as you walk up the hill. 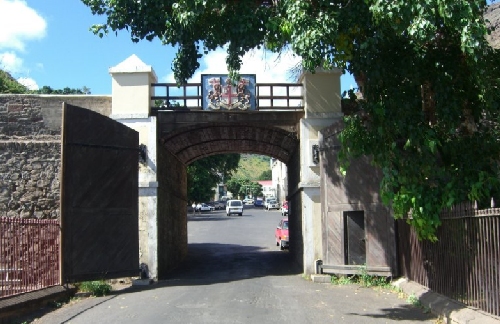 The gate leading to the town of Jamestown. The sea is right behind us. 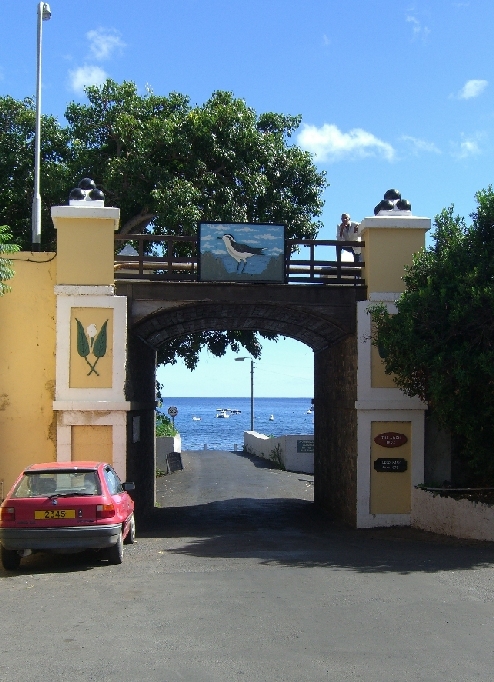 The same gate, looking out to sea from the town. You can start to see why Jamestown is considered so picturesque. 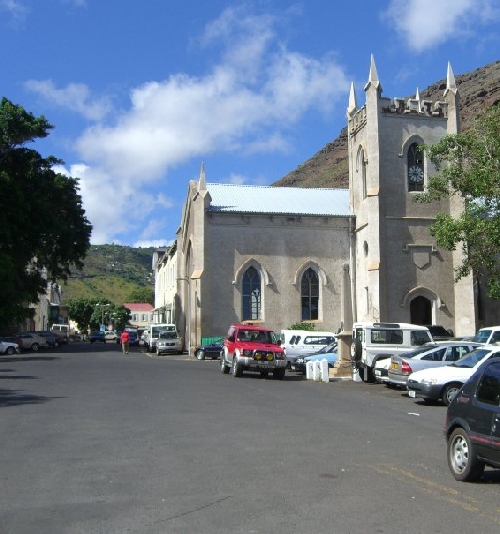 Standing in the same position as for the photo above, only this time looking up the street to the church and the main street of the town. 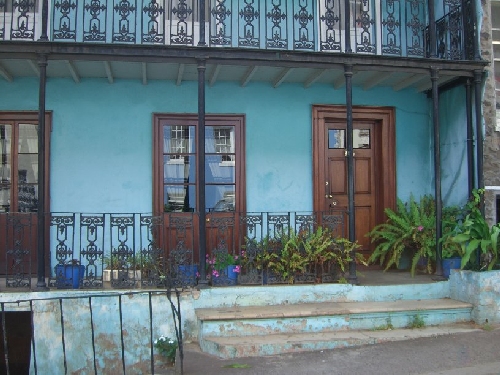 Every building seems to have a story to tell. The colors are vibrant. 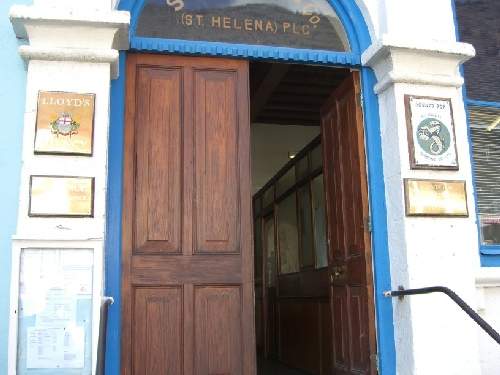 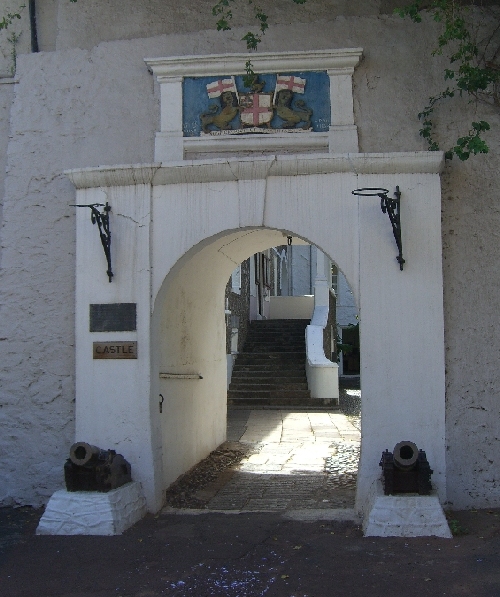 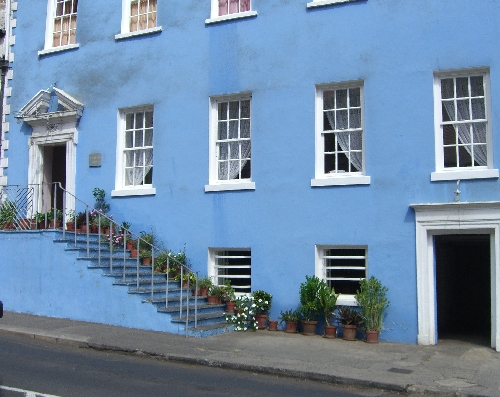 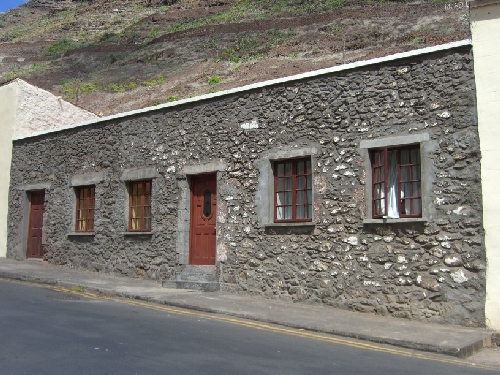 Some buildings look as rustic as the craggy cliffs on either side of the town. 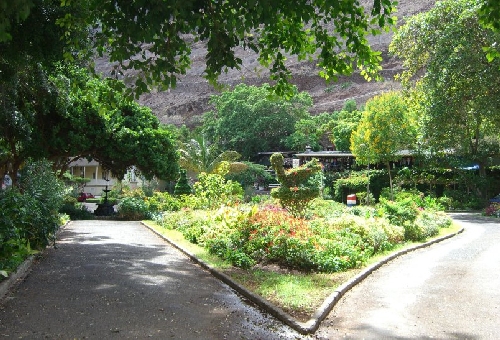 There are some beautiful gardens, too. This one was is across the street from the large church.

But it isn’t only the terrain, buildings, and gardens that make St. Helena distinctive. There are some very interesting cars. Brother John, we took these for you… 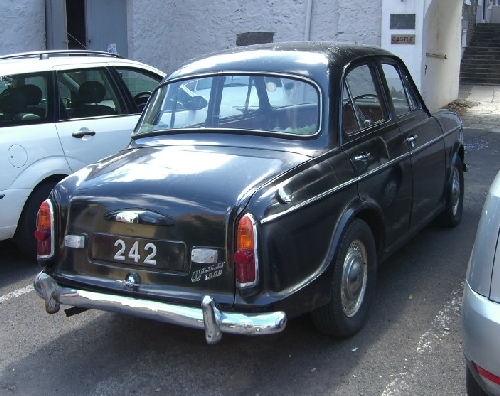 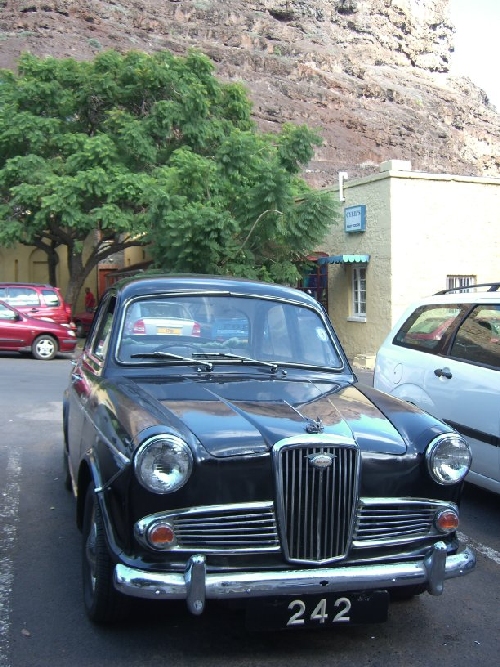 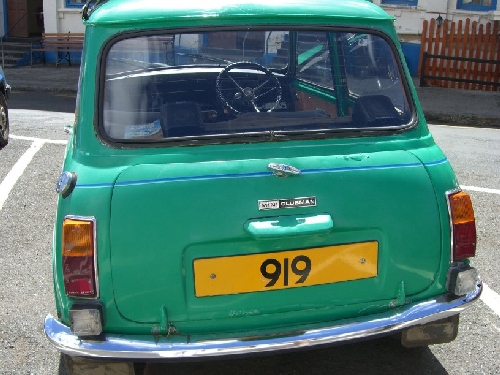 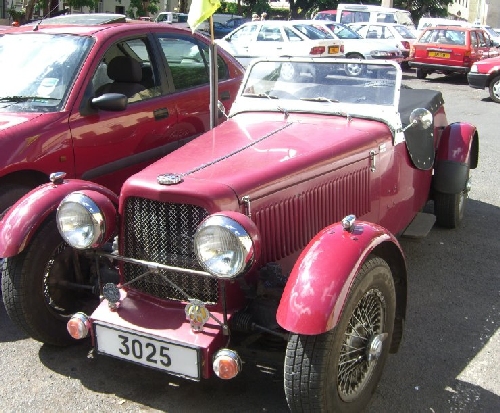 We had to take care of the paperwork first; we went to the police station for immigration, the top floor above the bank for customs, and a small office in a house for port control. We checked in and checked out in one transaction, because we knew that we would be leaving today.

Then on to the shops – we got bread, freshly baked and unsliced. We got the last head of lettuce for the day from the local grower’s cooperative, and we got some lovely ham – the pigs are raised locally. The shopkeepers accepted South African Rand, American dollars, British pounds, and St Helena money. Some accepted credit cards.