“Ships passing in the night” sounds so romantic – unless one of the “ships” is yours and the other ship is a tanker getting closer by the minute. I think most people think of at-sea collisions as a head-on situation, but since there are no freeway lanes out here, it’s possible to collide even if you are both going in the same direction.

Just as I was drifting off several hours ago, Philip had to wake me up to help him with a rudder adjustment. More on that in a second. Because I was late getting to bed, he let me sleep in an extra 45 minutes, coming to wake me at 1:45 AM. I love that guy.

When I got up, and took the watch, I saw that there was a ship just starting to appear on the horizon, on our starboard (right) side. I could see it out the back door. The ship was basically behind us at that point. One lesson I’ve learned on this trip is that the first thing you do is get a compass bearing on the ship. That way, you can watch it over time and see if it is going slower than you or faster than you, or the same speed.

This was a large ship, or looked like one based on its lights. I could not see the body of the ship at all, just the white bow light, the white steaming light (meaning it was under power) rather high up on the ship, and a red light – which told me I was looking at the port (left when facing the bow) side of the ship. So it was going the same direction we were.

I turned on the radar, and saw the ship clearly displayed there. It started out about 6 miles from us, but got as close as 3 miles at its closest. Radar screens show bands in intervals, so you can gauge distance. I had the display set to show 6 miles; and when it’s set for that, the rings around us were 2 miles apart. Our boat is shown in the center, and our current direction is shown as a vertical line going from our boat to the top of the screen.

As the ship got closer, I still wasn’t sure yet if it was going to overtake us (go past us) before it got too close for comfort. Because I’m still being cautious due to my “first ocean voyage” status, I woke Philip up and we watched it together. He suggested that we turn away from the wind (the ship was upwind of us), going counter-clockwise on the compass, about 20 degrees – just as a precaution.

I kept checking the compass in the cockpit, and slowly but surely, although he was definitely getting closer and closer, he was also going faster than us. Looking across the compass at him, he went from 80 degrees to 70, then 50, then 35, then 25. By that time, it was more than clear that he was going faster than us, and he was going to overtake us. Philip went back to bed, and once I could finally see his stern light, I reset the autopilot so we were back to our original course – 325 degrees on the compass.

I do try to check the horizon every 10 minutes or so, while I am on watch, because things can happen quickly if two boats are heading straight for each other. I always step out into the afterdeck at the rear and the cockpit forward, to check the horizon.

I noticed tonight that it was very difficult to see that ship’s lights through the tinted pilothouse windows when the red lights are on in the pilothouse. I think I’ve mentioned before that the red lights allow you to see just fine – except for reading – and they help you maintain your night vision. The boat has white lights inside for working on things; amber lights for when you’re at anchor or a marina and want the boat lit up more than with the red lights (“mood lighting”); and red lights, for night watches.

New experience yesterday. In the morning, we realized that we had been dusted – covered is a better word for it – with a brown dusty film. At first, Philip suggested it might be algae, but then also said it could be sand from the Sahara. I think he might be right about that; the dust definitely came in on the wind. The white shortwave radio antenna, for example, was completely brown on the windward side (the side the wind was coming from), and white everywhere else. The boat is still covered with salt crystals, so now the brown dust and the salt crystals are having a party on the decks and every other surface. 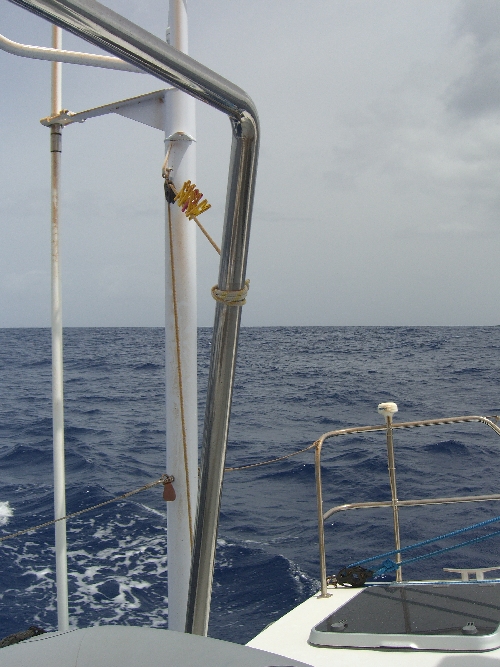 Some of the dust has blown off in this picture, but you can see it pretty clearly on the white antenna pole. It really covered EVERYTHING on the windward side, every nook and cranny…

So, on my afternoon watch yesterday, I spent some time cleaning things up. I got all the dust out of the cockpit, using the bucket, damp rag and small scrub brush method that Mandlenkosi used when he was cleaning Horizon for us every day in Cape Town. It’s amazing how effective that is, and how little water you need to use, if you use the right kind of rag – thin cotton is the best. Thinner than T-shirt material. I washed the pilothouse windows, and also got the dust off the solar panels, which are definitely (measurably) more effective when they are clean.

The rest of the boat, however, is still covered. We have been under rain clouds for two days, but no rain has come yet. That’s the real solution – a good dousing. Yes, I could use the salt water washdown system, but we haven’t actually used that system yet, and we are happy to wait until we get home before we try it. I’m hesitant to add any “honey do’s” to Philip’s list, if something should not work right. This is, after all, a VERY long “shakedown cruise.”

Speaking of which, when you travel thousands of miles on any boat – new or not – things will be affected by the forces that they are subject to. Things stretch, get loose, etc. As Philip started his watch last evening, he heard a new vibration, and tracked it to the port rudder. It needed some adjustment. So he worked on that a bit. He’s not done; we sent an email to the designer tonight to ask a question or two about it before finalizing the adjustment.

After I mentioned that Roger was a changed man in yesterday’s post, he sent an email to us…and one question he asked was if the change was for the better. Philip and I talked about it, and we were going to send an email back, but then decided to answer it here…so, Roger, here’s your answer: Yes. For the better. When you left on that delivery, you were the same intelligent and observant guy who came back, but there was a new element added by your sea time. You were more pensive, focused, and somber. There was a new kind of watchfulness, a thoughtful watchfulness, that had not been there before. You also had been tested in new ways, and succeeded – so there was a new confidence also about what you were capable of. You seemed more sure of yourself, and more connected to your surroundings.

This is what is happening to me, as well. In my case, the key is to stay calm, to “be cool,” no matter what is going on with the forces at work, or what other people are doing or saying. Anything uncool just impedes progress, adds unnecessary stress to communication, and makes it more difficult to separate the essential from the non-essential.

One last thought – then I must go back to book writing. Philip and I were talking this afternoon about how being out here is different from land life. One thing that we don’t miss is the begging. In Cape Town, it was up close and personal, people coming alongside as you were walking at the V&A Waterfront, or coming to the boat and begging.

At home, begging comes in the form of emails, mail and telephone, asking you to contribute, to fight the good fight, to help someone achieve their goal. And then there are the appeals with the intent to manipulate. The news is filled with stuff like that. People saying how terrible things are, in order to get you angry or saddened enough to take action – usually by contributing money to someone.

Meanwhile, what of our own lives? What kind of contribution are we making to that? Those precious minutes that we have been given, which will never come again, minutes meant to be spent on carrying out our lives’ purpose…loving others…and coming to terms with God.

Better stop now, before I get waaaaaaaaay off topic. 🙂