Going upwind now (sailing as close to the oncoming wind direction as possible), making 5 – 7 knots in what is probably 5 – 10 knots of wind. We have a hitchhiker. Victor C. asked if we had seen much sea life, and I answered him today saying that I had reported on all the sea life we’d seen, except for two Portuguese Man O’Wars I’ve seen floating by in the last few days.

There were the freeloading brown birds, the albatross that stayed on the deck one night, the dolphins just off St Helena, and the laughing gull the other day. There have been other sea birds, but not close by. Tonight, however, as if on cue, I discovered a tern on the pilothouse roof. I had just adjusted the mainsail for our current heading, in the moonlight, and was going up on the top of the pilothouse to check something on the boom. As I started to climb the steps on the side of the pilothouse, I realized there was a tern on the roof, about four feet from me. I stopped, told him I wasn’t gong to hurt him, and backed down. 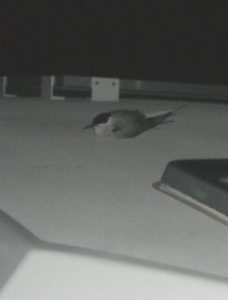 He tried to spread his wings, but something isn’t working right. He’s looking pretty worn out and forlorn. Outside of taking his picture – for you and for Philip when he wakes up, if the tern is gone by then – I have let him be. I’ve checked on him a few times as I’ve scanned the horizon for traffic. I can hear him scuffling around on the roof, and he has moved himself from the front of the pilothouse roof (where he was when I took the picture) back so he is close to one of the starboard solar panels.

He needs to be there, hunched down near the solar panel, otherwise the breeze over the top of the pilothouse will blow him off. We were going 4 knots before I adjusted the sail and dropped the daggerboard down all the way, but now we are easily doing 5 – 7, and whenever we go over 6 knots, I can hear him scrambling a little to stay in place. Otherwise, he’s hunkered down, resting. He may be injured to the point where he can’t hunt for food, or, he may just need to rest and he’ll be off and hunting in no time. We’ll see. I am sure he will leave some gifts for me to clean, which is a bit unfortunate; tern gifts are especially fishy, in my experience. No matter.

We obviously didn’t stop in Bermuda. We will go there in the future, after Horizon and her owners have recovered from this 8,000-mile, two-Atlantic-oceans voyage. We will do it properly, taking full advantage of the beautiful anchorages that Chris White, the designer of this boat, told us about in an email today. One of the lovely things about a boat like this is her shallow draft. “Draft” is the amount of the boat sticking down below the waterline. Another way to refer to it is to say “she draws 8 feet.” I’d have to check the specs to be positive, but I think Horizon draws 3 feet with the daggerboards up, and 7 or 8 feet with them down. That means that we can anchor in very shallow water, where other boats cannot go. Can anyone say “seclusion”? Ahhhh.

Happy cook, happy eater tonight. Made meatballs and a meatloaf from ground beef that had been in the freezer. They were Italian meatballs, with chopped onion, garlic cloves, fresh basil from Matthew’s garden, lots of Italian spices, “garlic” diced tomatoes from a can, a nice pesto/parmesan spice mixture that I’ve come to appreciate, and some wonderful sage/apple/hazelnut breadcrumbs from Woolworths in South Africa.

I was a little worried that the sage would not work with the Italian spices, but it only brought out the Italian spices even more, and added a very interesting “side note” to the overall taste. I’m glad we liked it, because there is plenty of it. Tonight I served it with a warmed-up can of Mediterranean tomato sauce with pieces of zucchini and eggplant. I think that’s my last can – too bad, because it’s pretty good. I should have bought more of those in Cape Town. Tomorrow I’ll vary it a bit by making covering it with a pesto-ized white sauce.

We are about 600 miles from home. If we make 100-plus miles each day, we are 4 – 6 days from journey’s end. This wind is plenty to keep us moving right along, and there may be some extra on the way home, because of some storm activity north of us. We’ll see. Whatever the weather is, we can handle it. This boat has a satisfying range of options for varying wind strengths and direction. All the way from a tiny, reefed jib and mainsail, to a full mainsail and the code zero jib. Regardless of the conditions, we have been able to keep her moving with wind power almost all the way. I think the only time we used the engine – except while making repairs – was when we weren’t going to get to St Helena before nightfall if we didn’t, and for a few days through the doldrums. So far, so good.

It’s getting cooler. That is relative, of course. We find 80 degrees in the pilothouse has us thinking of adding a shirt, and when it gets to 75 – as it is now – a sweater. I was never comfortable in the heat until those months in Cape Town, where we adapted. One of the best tricks is taking a damp chamois, cut in a long strip about 4 inches wide by a 18 inches long, and putting it around your neck. With one of those around my neck, I can still function, even in 100-degree heat.

I asked Philip the “all sea, all the time – isn’t it boring?” question from Andy M’s kids. He also talked about being able to read the water, and added the fact that you can look at it and tell where it’s been blowing, how hard, and how far away – by the swells. We agreed that, since there is so much information to be gained by the water’s surface, because it is so important to your survival, and because it’s changing all the time, it is far from boring. Every single day, and several times a day, the sea is different, and the horizon is different.

I thought I’d write my second business book out here. I have made progress on it. And I will work on it more tonight. But it appears I have devoted much of my writing time on this journey to these messages. I’ve really loved doing it, and I’m going to miss it when we get home.