1 PM in the afternoon, Saturday – from Philip:

I’m seeing a change in the bird life. We always have birds coming around and looking for fish that are disturbed by the passage of the boat. Either ahead of us, rushing to get out of the way, or behind us, disturbed by the wake.

The deep ocean birds are very skilled at using the updrafts created by the sails to give them a boost upwards or a place to hang out and look for fish. This is in addition to their normal flight method, which is to use the energy that is in the waves to accelerate themselves to high speed by skimming just above the water, on the face of a wave, much like a surfer does, but not quite touching the water. And then, when they’re up to speed, redirecting themselves upwards where they can have a look around for something to eat. They don’t do much wing-flapping.

But now I am starting to see birds that spend some time on land. There’s one out there now, more or less circling the boat. I’d like to give you their names, but I have not been able to find a good book for identifying ocean birds. There are not a lot of bird-watchers out here, so I guess no publisher has been willing to publish a book that helps identify them. The only book I found was one called Ocean Birds, by Lars Lofgren, which is really directed at land people. It’s the usual eco-lecture with ocean birds as the subject.

If anyone knows of a book that would be helpful in identification of deep ocean birds, please let me know. Thanks.

We did manage to identify one bird this afternoon, using the book. It was a Red-Billed Tropicbird. Very pretty bird with a long tail streamer and distinctive black markings on his wings, making it easier to identify him. He hung around for a while this afternoon, flying all around the boat. 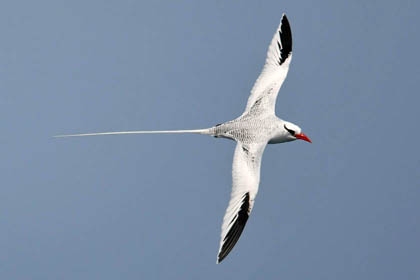 Here’s a picture of the Red-Billed Tropicbird. I found this photo on a photographer’s website – Christopher Taylor. There are more pictures on that site, if you want to see them.

Earlier in the afternoon, I asked Philip for one of his credit cards, so I could call the number on the back and pay the minimum by sat phone. Everything else, financially speaking, is under control, but even if you pay off the whole balance on a card – which I did on all of our cards before we left Cape Town – new charges can show up, and you need to at least pay the minimum. Since I can’t get on the Internet right now, I have to do it by phone.

Anyway, he went to get his wallet, which was in the pocket of his shorts, which were rolled up and put on the shelf in the hanging locker (closet) in the stateroom (bedroom). Obviously the first time he’s done that since we left April 20. No place to spend money here at sea.

Good thing we didn’t wait until we got home to do it. He called me in.

I knew by the tone of his voice that we had a mess on our hands. Yep. Mildew City.

I’ve never seen so many versions of mildew. Black, green, yellow, grey. Philip said you could have used a lawn mower on the grey stuff. All over the clothing and leather items, including his wallet, his belts, and his Leatherman case. In fact, it seemed to have started with the leather items. Who knows why.

We had smelled that old familiar smell several weeks ago, so had started to leave the door open to the hanging locker. Ventilation is the best prevention for mildew. But we hadn’t realized that the mildew had already taken hold of that one pair of jeans and a pair of shorts. His favorite pair of shorts, of course. He wore them almost every day in Cape Town. The used to be a long pair of cargo-type pants, but just before we left home in October, I turned them into cuffed shorts.

Anyway, back to the yuck.

The admiral doubles as the boat’s official cleaning lady. Out with the plastic bags to lay the stuff on the galley counter. Out with the lemon juice, the best mildew killer I know of. Once everything is wiped clean, out they go into the sun.

“Stay cool,” I kept telling myself. It was hot in the galley and the mustiness wasn’t the most pleasant thing in the world. I was determined to maintain my good humor. 🙂

I remembered a little ditty someone had posted in a room in a church we used to attend. I don’t remember the exact words, but it was something like, “Life is a combination of slaying dragons and chewing gum on your shoes. I could have coped with the dragons.”

I was able to save everything, including the favorite shorts, (and my good humor). The mildew, which can eat through cloth, had not gotten that far. The leather items are now out in the bow of the dinghy, each with their own piece of string tied to a solid piece of line on the dinghy. A day or two in the sun and they will be fine as well. Good.

Still later in the afternoon, I asked Philip about a bruise I had noticed a week or two ago on his back, on the left side, about halfway down. “What bruise?” he said. It is yellowish at the base, with purple streaks – the purple streaks are about 1.5 inches wide by 1 inch high. Although I had noticed it before, I didn’t think it was anything to worry about – we both have gotten our share of bruises, and Philip’s shins are a lattice work of small cuts and bruises from working on the boat. I paid more attention to this bruise this time, though, because it doesn’t seem to be going away. There is a mole nearby, and, upon further investigation, a lump about 3 inches below the bruise. Of course, given his cancer history, I swallowed my heart when I felt the lump. I’m really hoping it is just that he bruised a rib in the course of doing something and didn’t notice it happening (another common occurrence on a boat that’s moving around like this one is now), and the bruise is going through phases, as bruises do. I took a picture, just in case, and I’ll keep a close eye on it now.

Speaking of eyes, my right eye felt strange today – as it did about a week or so ago. I thought there might be something in it, so I asked Philip to look. Nope. He suggested eye drops, I went to get them in the starboard head, and looked in the mirror. Oops. Right eye super dilated, left eye not. Hmmm. I put on sunglasses, and started to think about what it could be from, as I was cooking dinner. What about the seasickness patch? It’s been on the right side, and it’s time to take it off anyway. I looked through the little fine-print pamphlet that came with the patches while eating dinner, and sure enough, dilation is a side effect. I took off the patch, and after my long sleep period, checked again. Less dilation now, by about 25% less. Makes typing a little tricky, but otherwise I’m OK. We’ve probably found the cause. I’m hoping I can remain patchless for the rest of the trip. One would think my stomach would be used to the motion by now.

When we get home, we’ll be going to the doctor. We have a great all-around MD, Dr. Gloor, who usually is right on the money with his diagnoses. He’s the first person we went to when Philip first felt that lump on his neck, and he knew right away it wasn’t a garden variety lump. We’ll be showing him our poor toes – I think I have 6 good toes left now – and that bruise, if it’s still there.

The moon is out again, lighting up the whole sea. Here’s a shot of the moon over the water: 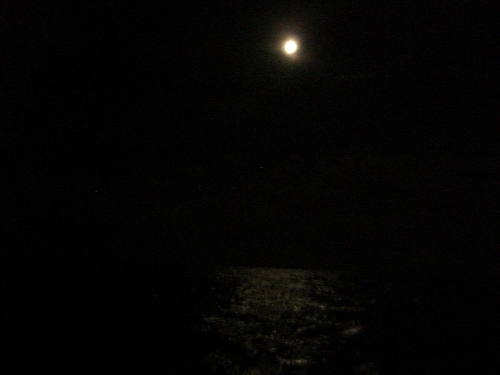 Pretty tough to take this kind of picture when you’re standing on a moving object. And there is no way to give you the feeling of “vastness” that you feel out in the open sea. You’ll just have to imagine it all…

The Big Dipper is pointing to Polaris, and we’re zooming along at 7 – 9 knots. We changed our course just slightly – from 325 to 330 degrees on the compass, because the wind is starting to clock around, as Matthew predicted it would. Puts us more on a direct course to Bermuda, which is the only place we plan to stop, if we are going to stop, barring any other unforeseen events. Right now, because of our position, if something did cause us to have to limp into port, the Caribbean is downwind and several days away, so it would be possible to get there relatively easily.

Bacon cheeseburgers tonight, using “Farmer’s Cheese” from Cape Town, which is a wonderful cheese for cheeseburgers. Somewhat salty, definitely robust. Lots of kz white sauce drizzled on top to make it moist enough for the captain. Gem squash on the side, mixed in with caramelized onions made with a little garlic paste, a little Worcestershire, and brown sugar. Salads are now mostly canned fruit – the canned grapefruit is the best, but we also have blueberries, pears, mandarin oranges, black cherries, and peaches. A little sprinkling of leaves from the garden – they’re still recovering. No sprouts, the new batch is not quite ready to harvest.

Philip thinks the boat is making the plants sway rather than the plants swaying to the boat’s motion. He’s probably right, but it sure looks the other way around. The chives and the celery leaves in particular.

There was a ship last night, way off at the edge of the northern horizon. Never got much closer, and soon disappeared.

That’s it from the crew of the Horizon. Much love to you all, have a wonderful rest of weekend.