Just started to pour again. We’ve been in the middle of squalls for days. Right now we have set our course for the next waypoint, and the autopilot is taking us there. Except when the wind does a 360. Hand steering is the best way to handle that. The wind always seems to do that in the middle of a squall [I just had to go outside and hand-steer for a while, turns out, for that very reason. Wet!]

During one downpour, while Philip was on watch, a young albatross made a crash landing on deck, and has been there ever since. He’s on the side deck on the starboard side (right side when facing the bow), facing forward, resting. I don’t know if he’ll still be there in the morning, but he’s welcome in any case. 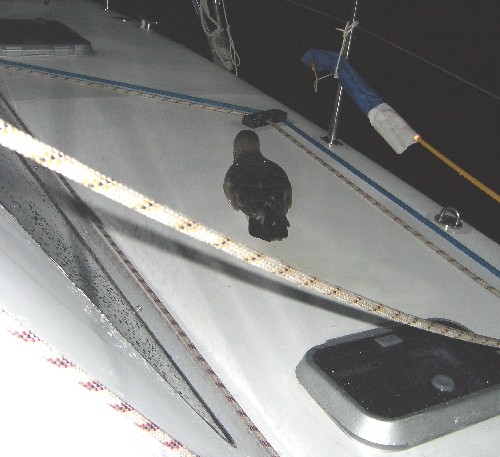 We’ve also had a couple of flies – first bugs since we left Cape Town – confirming that land isn’t far from us. We are actually directly east of Fernando de Noronha, an island archipelago we might have visited if they were more welcoming to Americans. Ditto for Brazil. Never mind. We’re doing fine, thank you.

We haven’t opened the Halfway Box yet, but we will.

Spent several hours in 1-knot wind this afternoon, but it came up again as we approached some storms. We are basically going upwind now.

Spinach seeds are sprouting nicely. Sprouts didn’t fare so well – got a little mushy. Have to rinse them more thoroughly each day and give them more ventilation, I think.

Dinners are getting weirder than usual (Philip once called my cooking “weird but good.” LOL). I told Philip tonight he was getting “Eggplant Surprise,” and he responded that the longer we are away from land, all the dinners are getting surprising.

This time I cut up the last St Helena eggplant, shallots, and garlic into pieces, cooked them in oil and some added water until soft, then added fig preserves, sour cream (last half of last container), Chinese Five Spices, some dark brown sugar, one cut-up apple, and a few maraschino cherries, just for fun – a trick I learned from our insurance agent, Margie, who always includes them in a fresh fruit salad.

The “Eggplant Surprise” was good with the steaks. Since Philip only has about 10% of a normal saliva quotient – because of his throat cancer treatment – I always give him something “goopy” to go with his steak. I’m making sure we have cooked veggies in addition to the fresh ones, because as I’ve mentioned, I can’t get a whole lot of lettuce each night without overtaxing the plants.

I’m beginning to wonder if I should send these messages after my watch is over, to avoid the “all hell breaks loose” syndrome after I hit “send.” But I’ll take a chance and let you know how it turns out…

Hope all is well with all of you. Miss you!